Statistics for 2019 show that one in six adults has a mental health condition and one in 100 suffer with severe mental illness.  Studies have also shown that mental illness in African Americans have been found to be more severe due to unmet needs and other barriers.  According to the Health and Human Services Office of Minority Health, African Americans are 10% more likely to experience serious psychological distress.

With what we know and  hear of day to day referencing mental illness, depression and suicide why are we still so uncomfortable in talking about it?  Why is “mental” health categorized outside of just “health”? The stigma in mental illness, although more often related to context than to a person’s appearance, remains a powerful negative attribute in all social relations.

It’s unfortunate that most associate those having psychological issues as being “weird” or “crazy” which is one of the reasons most battling the illness is fearful in coming forth and admitting to their struggles.  Why is “mental health” not part of the curriculum in every school? If this were talked about and taught early on then most would know the difference in having a bad day or something more that they can’t just snap out of and handle on their own.

I can recall growing up hearing people say they were depressed or didn’t feel like themselves but couldn’t figure out was wrong.  I remember some of them being told to have a drink or that they had everything they needed so they had nothing to be sad about. That’s just it…with mental illness, you don’t have to have a reason to be sad.

I’ve witnessed depression and mental illness first hand.  From my daughter, countless family members, some now adults and still not willing to accept it and get the help needed as well as friends.  Their struggle is far more extreme from just a “not so good day”.

The suicide rate has slowly increased since 2008 based on the reports from American Foundation for Suicide Prevention.  Suicide is the 10th cause of death in Americans and 47,173 died by suicide in 2017. Adolescents and young adults aged 15 to 24 contributed to 14.46 of this rate.

It’s time that we break the stigma and talk about mental health.  Don’t pass judgement because we all have burdens that we carry. My mission in sharing my story is to bring more awareness to mental illness and suicide prevention because I never thought this would be my truth but unfortunately this is my reality. Show compassion and be kind to one another because you never know what someone is going through.

Some of the signs to look for are constant feeling of  sadness, confused thinking, excessive worrying, extreme mood changes, withdrawals from friends or your normal activities and fatigue or problems sleeping.

If you or someone you know is battling depression there is hope so please don’t be afraid to get the help needed.  You’re stronger than you think and needed more than you know. Things will get better just hold on and keep pushing.  Sometimes being there for someone feeling hopeless may be all the hope they need. 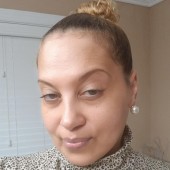 Making The Best Of The Situation

Staying Strong In the Midst Of Storms